‘Pupils may understand more than we believe they do.’

I called them ‘the Kung Fu group’. Every time I went outside to assess their progress, someone was either crawling up the side of the building or throwing some old school Bruce Lee shapes, to the embarrassed delight of six classmates. Unfortunately, this was not Phys Ed. It was English literature, and my seven warriors in training were supposedly rehearsing a choral recitation of Shakespeare’s Sonnet #29.

Neither I nor the Bard of Avon could really blame them. Our lycée, located in sunny southern Europe, is set into an intricately terraced series of hillsides. Its buildings curl their way across the landscape, blessing many classrooms with access to exterior courtyards protected by pine and olive trees. On early autumn days like this one, breezes from the not-so-distant sea bring a sharp, woody scent into the classroom. And so my teaching partner and I liberally interpreted the latest COVID protocols, sending our twenty-one students outside, to work in the open air. 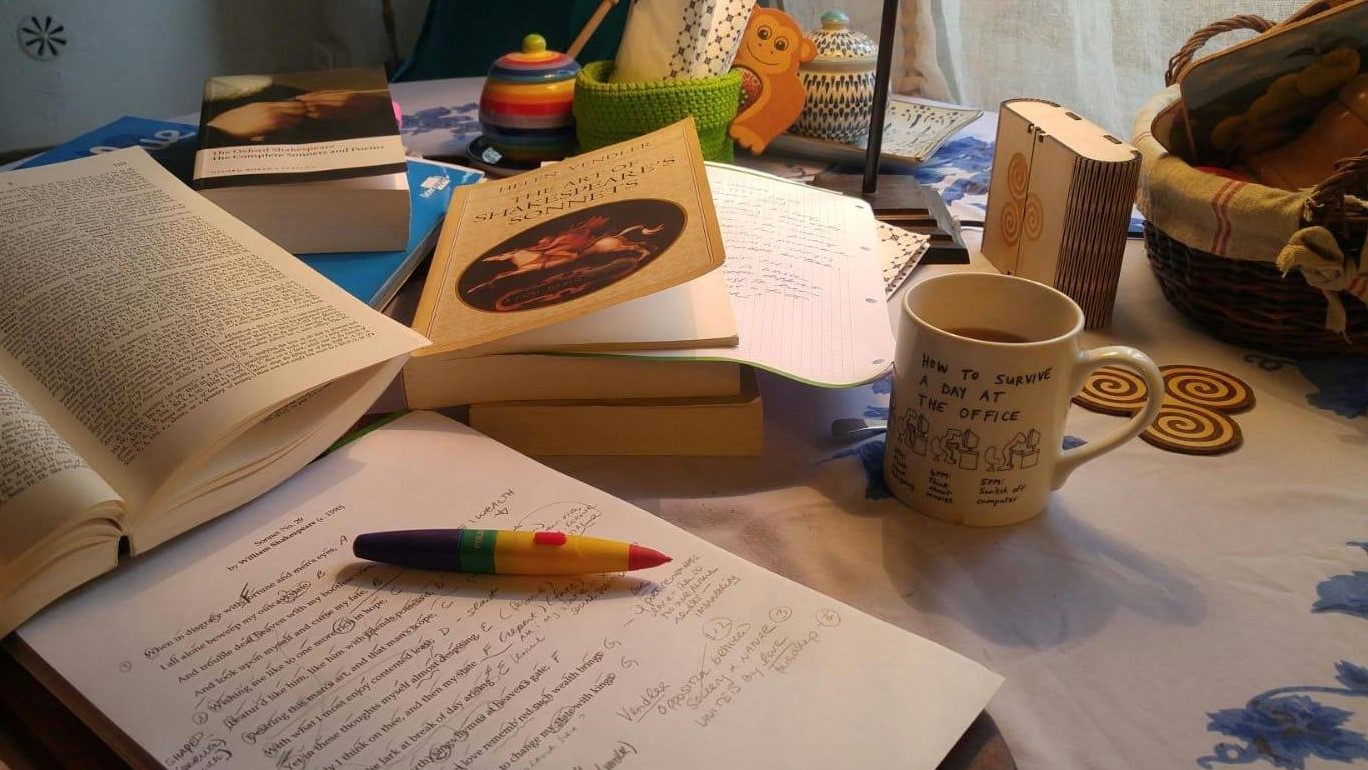 The Kung Fu group embodied the rich variety of students enrolled in the American section of our OIB program. They were 2nde level, roughly equivalent to UK Key Stage 4, or sophomores in an American high school: full of physical energy and perhaps lacking in maturity, but always eager to talk and be heard, each student a multilingual learner to whom the EAL acronym did not seem to accurately apply. Many have been speaking their native language interchangeably with English since childhood, while others speak two or three additional languages with equal ease. But skill levels are mixed in our section, resulting in a constant susurrus of voices in the classroom beneath the flow of instruction in English. It has taken me some time to understand that this is not a sign of disrespect, but active engagement, as more fluent students work quietly to aid colleagues who struggle with comprehension.

The choral Shakespeare recitation, which takes a passage designed for a single voice and distributes the lines amongst multiple speakers, is a challenging exercise, even in the context where I first encountered it, during MFA-level training in Shakespearean performance technique. Thanks to our OIB programme’s insistence on the centrality of poetry to English literature curriculum, my students already possessed strong practical understanding of the inner workings of a poem. However, this exercise asked them to dig deeper, to move beyond what I call “literary terminology bingo” towards an examination of the connection between sound and emotion. In just twenty-five minutes of group work, they needed to develop a coherent, nuanced, multi-voiced recitation of one of the most renowned sonnets in the English language. This was asking a lot, and I knew it.

Back outside, two of my three groups were working steadily. One group focused on caesuras and enjambment as a way to drive emotional impact. The other clarified pace and pronunciation for non-native English speaking colleagues. Around the corner, a young man in the Kung Fu crowd was jumping off a trash can. I sighed and called everyone back into the classroom.

Whether by accident or design, the other two groups presented first. These recitations were excellent examples of learning objectives acquired and applied. Lines were divided into precise phrases which respected meaning and produced interesting tonal effects. Their understanding of the language was accurate, their diligence impressive. But somehow there was a spark missing. I shook off the thought, chalking it up to fatigue, and asked the Kung Fu group to come to the front of the room. Up they shambled, and proceeded to astound us. Their group of seven was split almost equally along gender lines, and they physically arranged themselves in an alternating boy-girl pattern. Crucially, they assigned full lines in the sonnet in the same manner, alternating by gender and rarely splitting lines between voices, bringing an engaged excitement to the movement of the text. I realised I was listening to something innovative, a welcome variation on conventional interpretations of this beloved poem. Instead of the thoughts of an individual voice, I was hearing a dialogue: perhaps between Lover and Beloved, or a conversation between inner and outer speech.

At the centre of the line, the group had placed the student with the strongest English language skills, assigning him the closing lines. No critical analysis of mine regarding the significance of Shakespearean rhyming couplets could have been as powerful as hearing that young man’s voice ring out confidently in the classroom: “For thy sweet love rememb’red such wealth brings / That then I scorn to change my state with kings.”